Hit enter to search or ESC to close
Other

“Exercising breathing habits, whether while running or meditating, can be extremely beneficial.” – Gabe Miller

Extramilest Facebook Group member Gabe Miller (Strava) was recently able to run a sub 3 hour marathon (2:49:51), and got about a 15 minute PR. He mentioned that MAF Training and the Extramilest community has been a big reason why. In this post he shares more background on how he was able to accomplish this. Thanks for taking the time to write this Gabe!

Please tell me a bit more about yourself?

I was born and raised in Cambridge, MA and was heavily influenced by the running culture out there. While growing up, my mom ran several marathons, including two in Boston that I got to see firsthand (including the infamous Boston ’13 race). She was a true inspiration and it was because of her I always sort of knew I’d run a marathon someday.

In high school I ran track, but did mostly shorter distances like the 400m. In college I ran a bit, but very sporadically. Towards the end of my senior year I found the Extramilest blog and got inspired and determined to go sub-3. Ever since, long distance running/training has really become a big part of my life, and more recently, the MAF training plan/lifestyle has become a staple of it as well. I’m now 24 years old and living just outside Nuremberg, Germany working towards my M.Sc. in engineering.

What are some of your current PR’s?

I ran some unofficial PRs for the 5k and 10k at about 18 minutes, and 39 minutes respectively (according to Garmin), though I’ve never really trained for shorter distance races. My half PR was actually during my last marathon, 1:23:35, and my full time that day was my marathon PR, 2:49:51. Longest distance is a 36 mile ultra I did in August of last year.

Which marathons have you ran, when did you run them and what were the finish times? 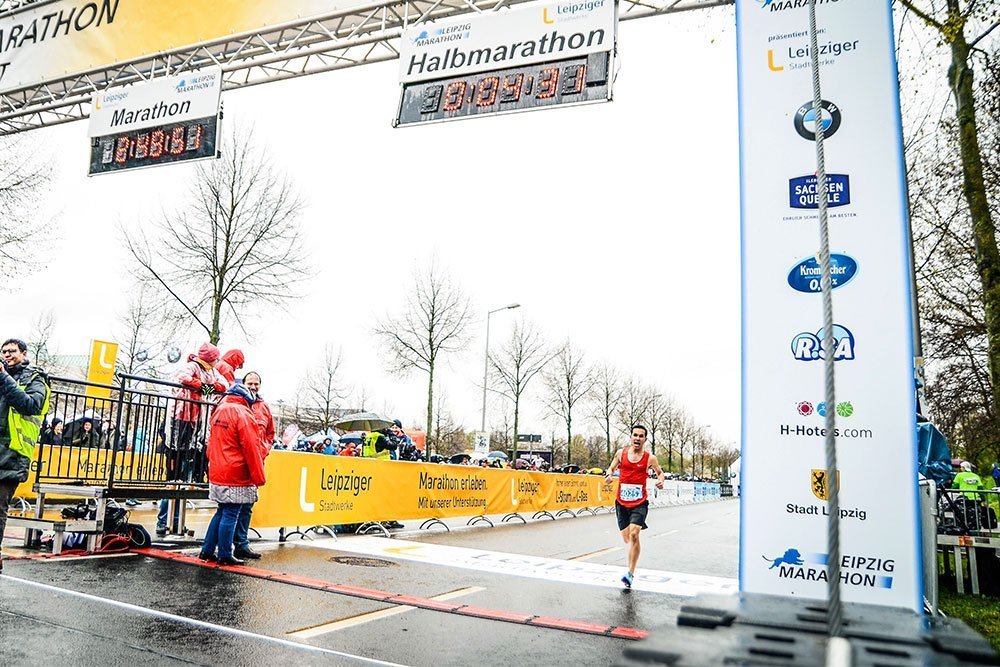 You recently ran a 15 minute PR, breaking Sub 3 with a time of 2:49:51 What was the biggest difference in your training and racing?

I’d say the biggest thing was just getting more miles under my legs compared to the first marathon. Last summer, as mentioned, I ran an ultra and was really locked in on accumulating time on my feet rather than doing any speed workouts. Same thing coming into my training for Leipzig.

I also made a concerted effort this time around to focus on heart rate. That being in training, and in terms of what I ate and drank, meaning less caffeine and adapting a higher fat/lower carb diet.

What was your training volume in hours or mileage like? How did a typical training week look like for you?

I was running at first about 5/6 days a week below my MAF rate, and eventually started running pretty much every day for a six week stretch in the middle of my training.

In terms of weekly distance, I averaged something like 60-65 mi/week over 16 weeks and peaked at 80 miles. Within that, I’d usually have Sunday be my long run (16-22 miles), Monday be my shakeout (3-5 miles) or rest day, Tuesday be another longer run (10-15 miles), and then Wednesday – Saturday I’d do anything from 7-12 miles/day with maybe another shake out day in there.

In terms of time, I started off averaging around a 9 min/mi to keep within my MAF range, which meant having to walk at some points during longer runs, but eventually got that down to around 7:35 or so. Also, with about 8 weeks to go, I started to do some higher intensity speed workouts, though never more than twice in one week and probably less than 5% of my total mileage throughout the plan.

Any strength or cross training? If so, what and how often?

I’ve always done some stuff at home like pushups, leg raises and pull-ups, but cut it out pretty early in my training once I started to deal with some shoulder and hip pain when running. The pain went away once I stopped so I never looked back. 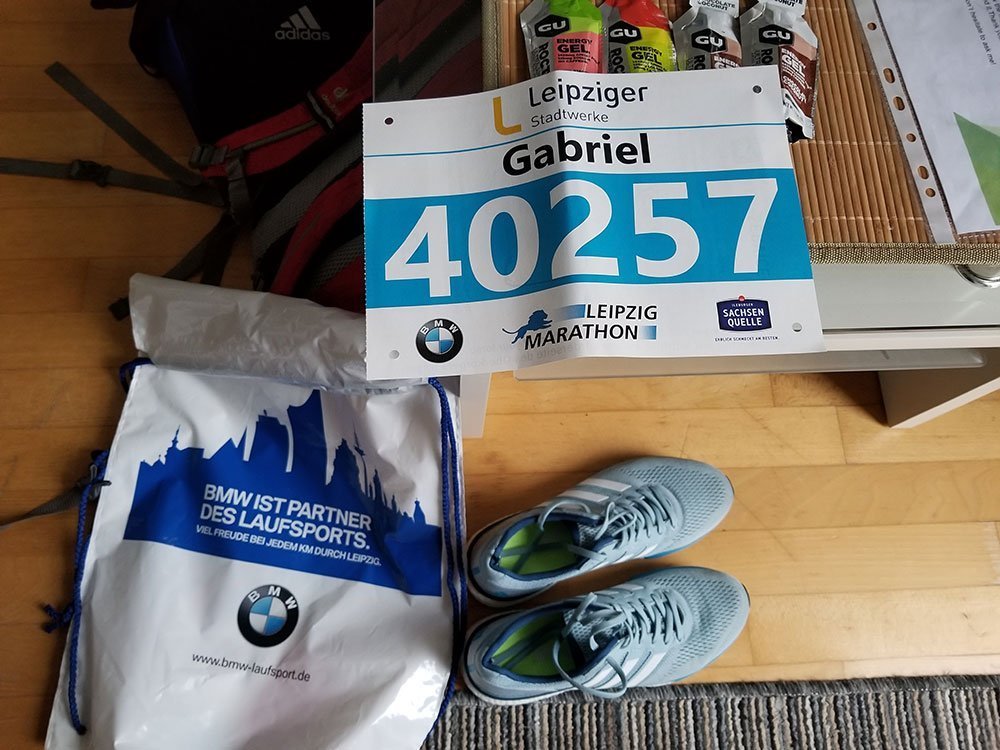 What was your race strategy going into the Marathon you recently PR-ed in?

Three hours was always the primary goal, but once I started to do some speed workouts and saw I was able to go out at a 6:30 min/mi pace pretty comfortably for about 6 mile increments, I started to think about going for the NY qualifying time of 2:53 (only just recently realizing this only guarantees entry for people who go sub 2:53 at a NYRR sanctioned race!). During my taper, I dealt with some pain in my right knee that made me rethink my goal again, but luckily everything cleared up by race day.

For water, I stopped at every other water station for the first half (generally about 10km apart), and then every station for the second half (5km apart). For fuel, I had a GU right before the race, and then had one 8 miles in, then another after 15 miles, and my last one after 21.

How did the race strategy work out for you?

Worked well overall I’d say. Think I was able to be pretty consistent about my splits though I could definitely do better. I did run a positive split overall, and my slowest mile at mile 25. That being said, I actually feel I left something out there and that the positive split was mostly due to my mental approach, as I ran mile 26 closer to my overall average pace and my last .3 miles at about a 5:55 pace according to Garmin.

Was a great feeling to have something left in the tank, especially compared to my first race where I bonked pretty hard with 10km to go. At the same time, definitely want to work on being even more consistent and mentally tough, which I’m hoping will come with more race experience. 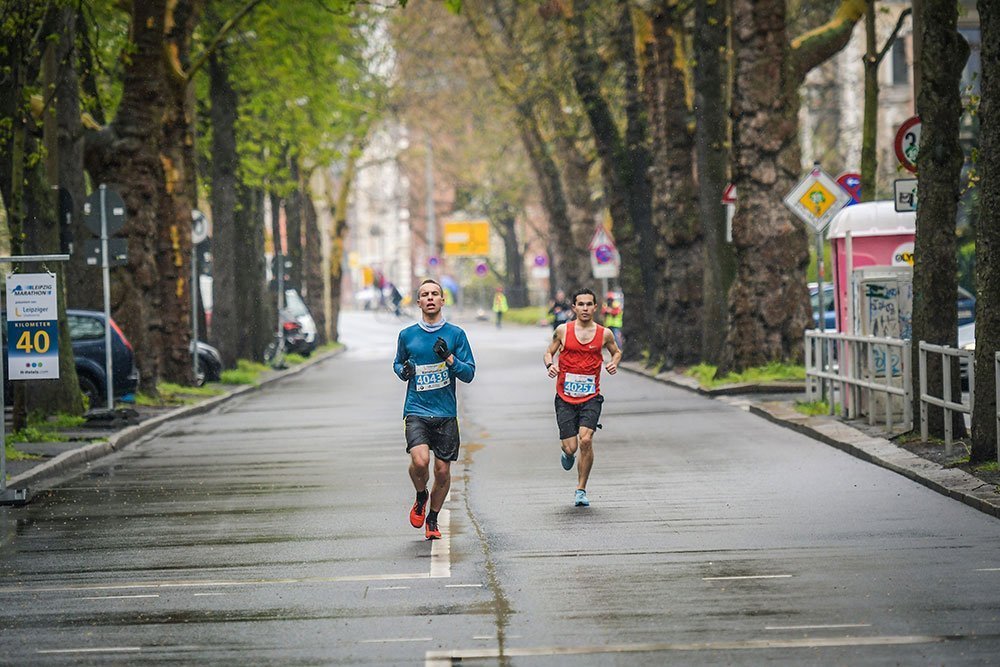 What did you do when you hit tough spots in your race?

The toughest part of the race was around miles 14-19 for me, when I started to feel a strain on my hammies and calves, and began worrying I went out too fast. Big shout out to Courtney Dauwalter here, one of my favorite runners to follow, who’s talked a lot about managing and living inside the ‘pain cave’ and how the feeling often comes in waves. Recognizing that the discomfort was passing was definitely helpful in not psyching myself out each time things got tough.

Also, big shout out to Bill Callahan from this group and the podcast you guys did. I adopted his method of dedicating each of the last miles/kilometers to certain people, and it was a great way to sort of zone out and ignore all of the crazy thoughts that pop in your head as you get closer to the finish.

What did you eat and drink the night before your race and on race morning?

I eat pretty much the same thing every day, and didn’t change much up going into the race except the quantity and also adding some more carbs to my dinner.

On a typical day, I usually eat a little bit of oatmeal with flax seeds/nuts/avocado topped with coconut shavings for breakfast, salad with some feta cheese for lunch, and a bunch of cooked veggies with tofu and feta cheese for dinner. As race day got closer, I would also throw in some lentils or whole grain pasta to the mix for dinner.

How did you limit your risk of injuries during training?

Stretching when I wake up/before bed, and foam rolling a couple times a week did wonders for me in dealing with the day to day aches and pains during training.

Overall though, this is something I need to think more about for my next plan, as I dealt with some knee pain towards the end of training, that seemed excessive even for a taper. Though I do love running every day, I think moving forward I’ll probably throw in some more complete rest days and maybe some different types of aerobic workouts like swimming to give myself more time to recoup.

Do you have any recommendations to other runners looking to improve, to become stronger, healthier, happier and faster athletes?

Working on your breathing while running I think can be a big help. I found using a breathing pattern of inhaling for two steps, and exhaling for three was a great way to keep my cadence pretty consistent. It was also a great thing to focus on when things were getting tough.

In general, I think exercising breathing habits, whether while running or meditating, can be extremely beneficial.

Which other races are on your bucket list to run?

Definitely hope to toe the line in Boston next year. Would be really cool to run in the city I grew up, with friends and family there to support. I’m also really keen on doing more ultras, particularly the Vermont 100. Western States would also be pretty high up there on the list. 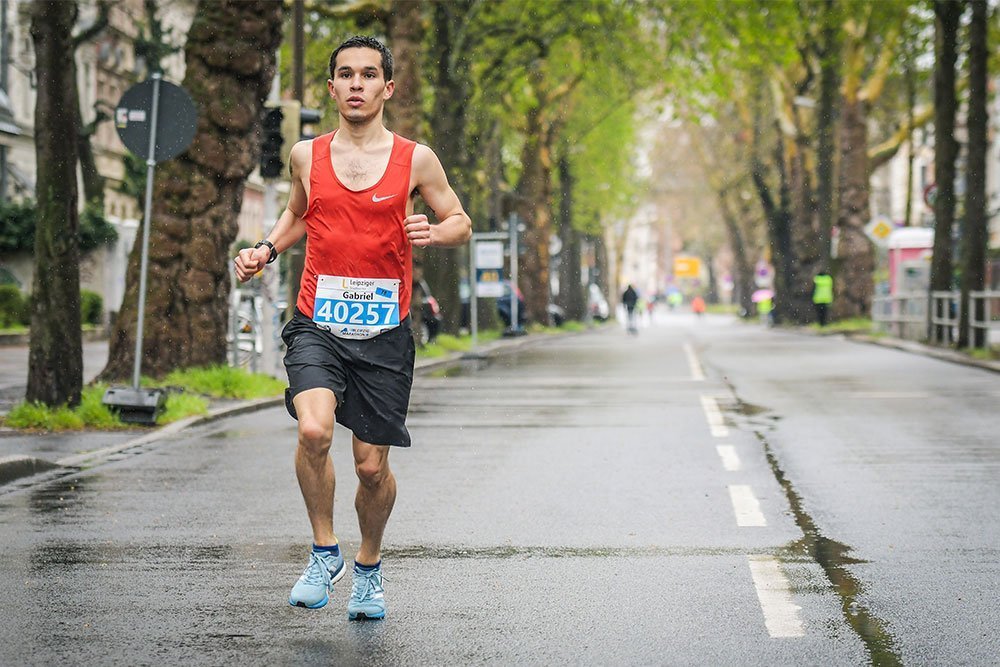 Any place where Extramilest readers can find out more about you?

I’m on IG (riel_travels) and Strava (Gabriel F Miller), but am not that active there other than auto-posting my runs. I am a big proponent of documenting your training progress, but mostly do this in a notebook.

Really can’t say enough how lucky I was to come across this blog when I did. Your content, Flo, is awesome and the Extramilest community it’s drawn in is an amazing and inspirational group of people.

Can’t wait to hear more of the great things people in this group accomplish in the years to come, and I look forward to meeting more of the community out there on the roads and trails!